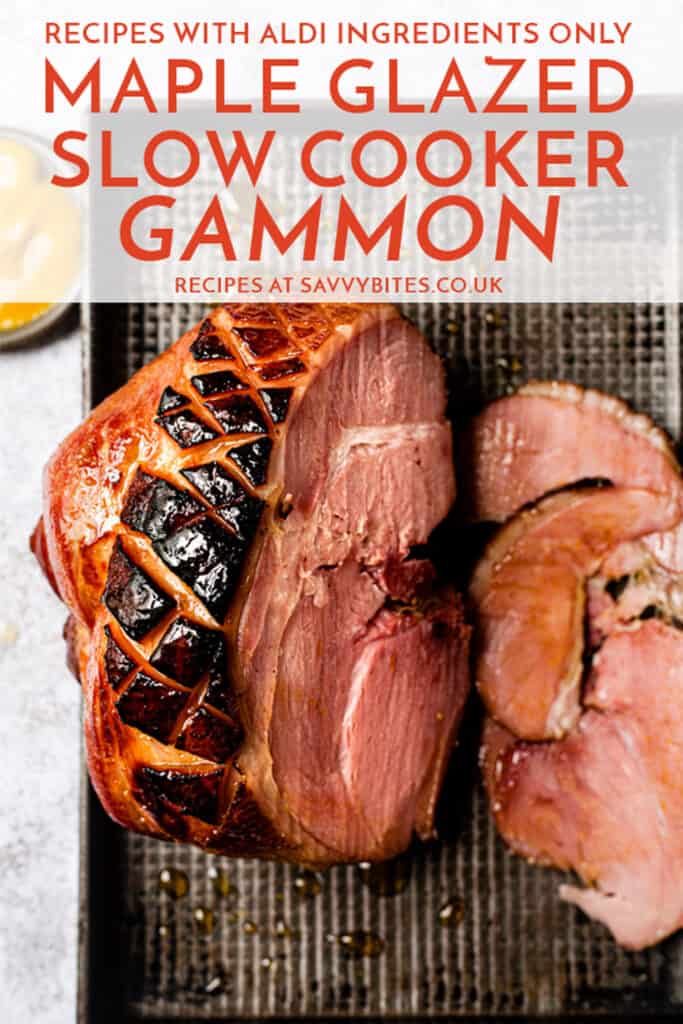 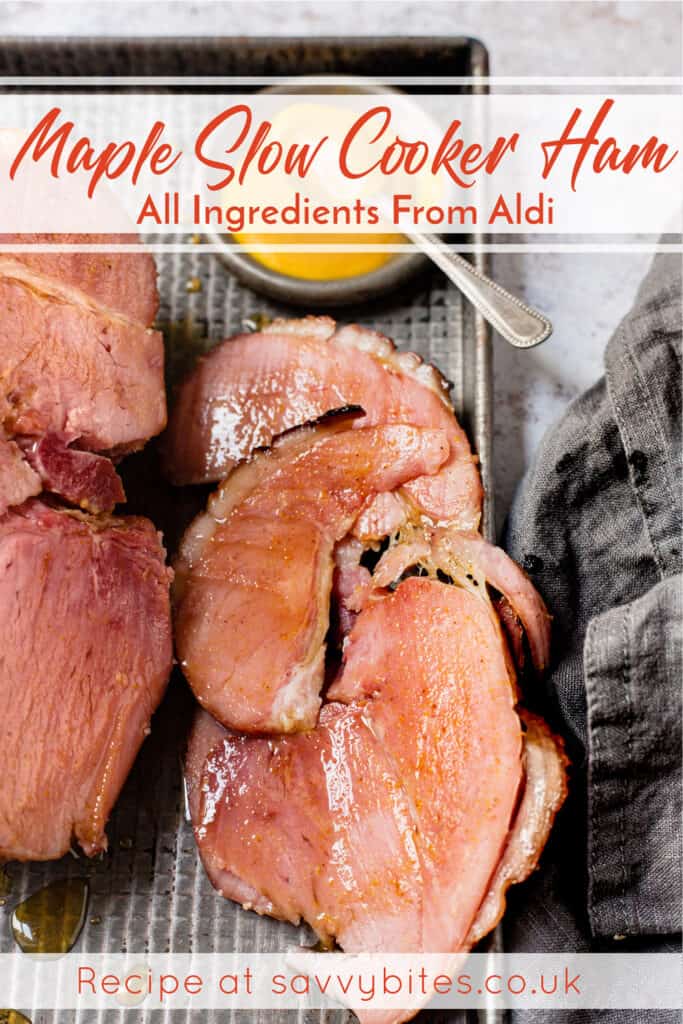 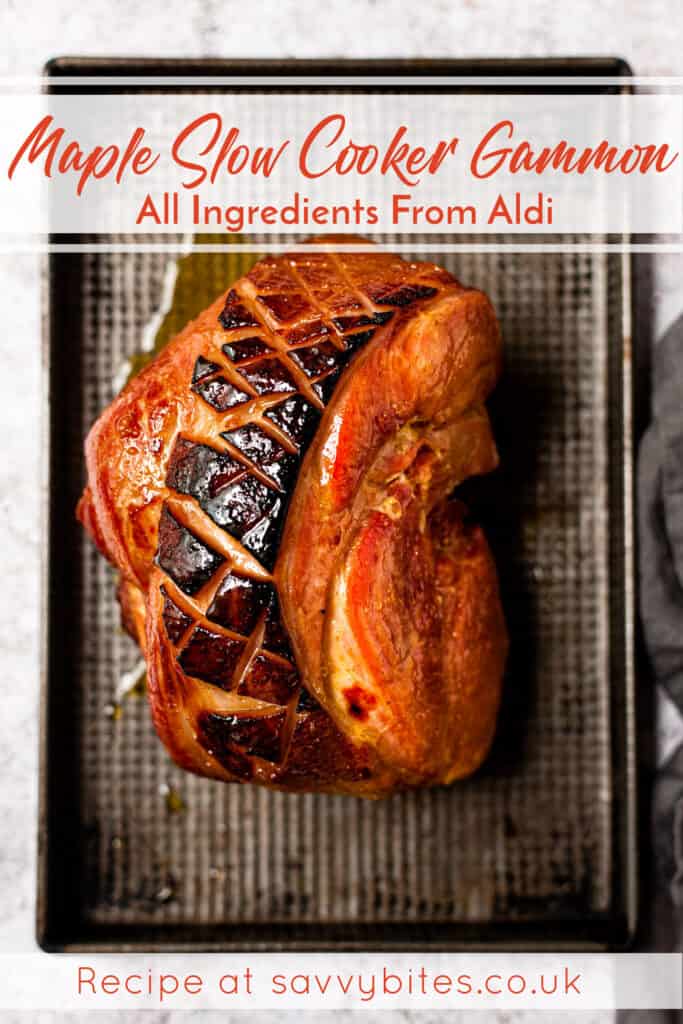 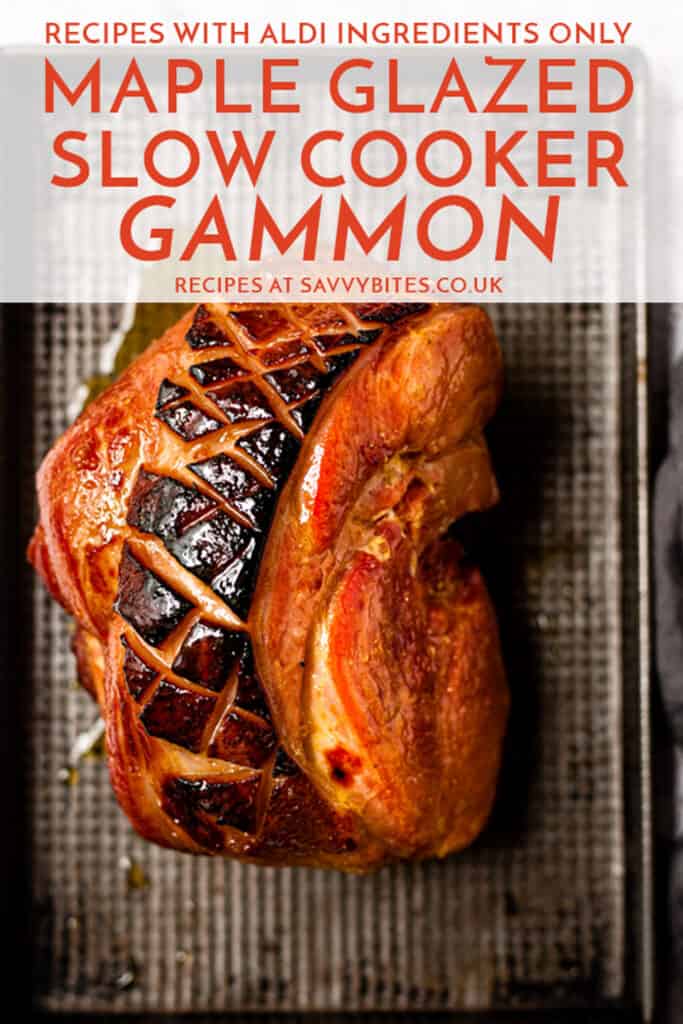 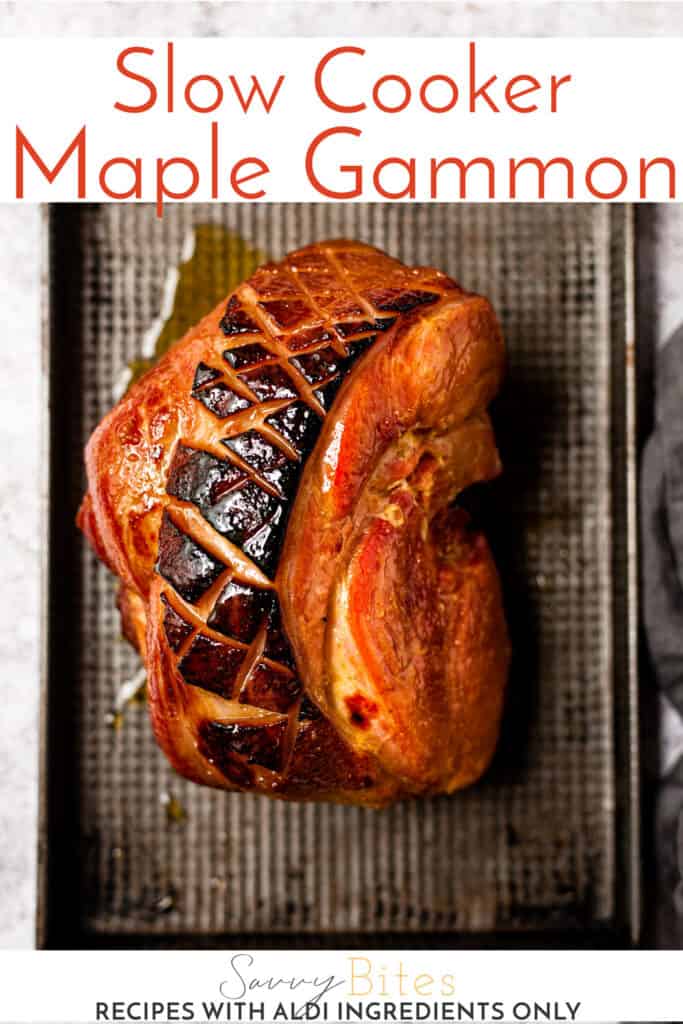 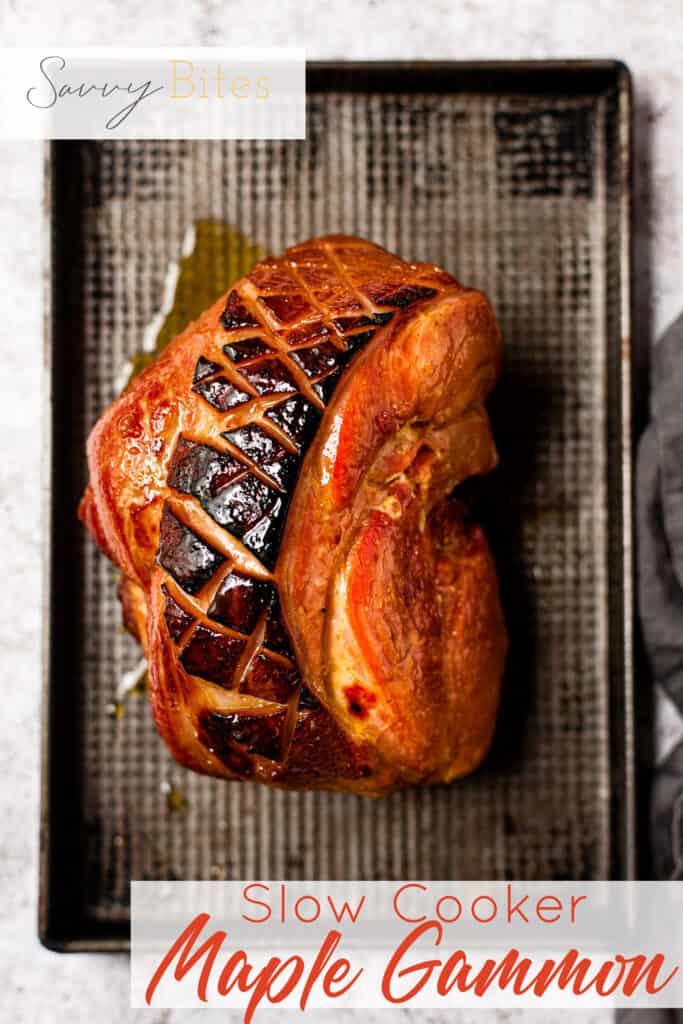 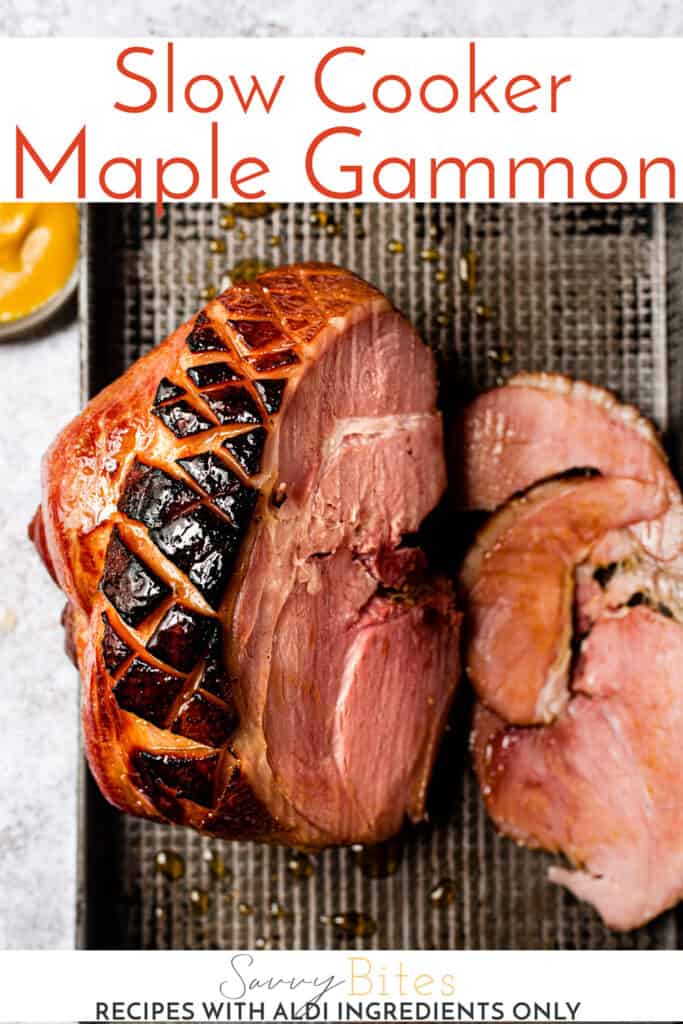 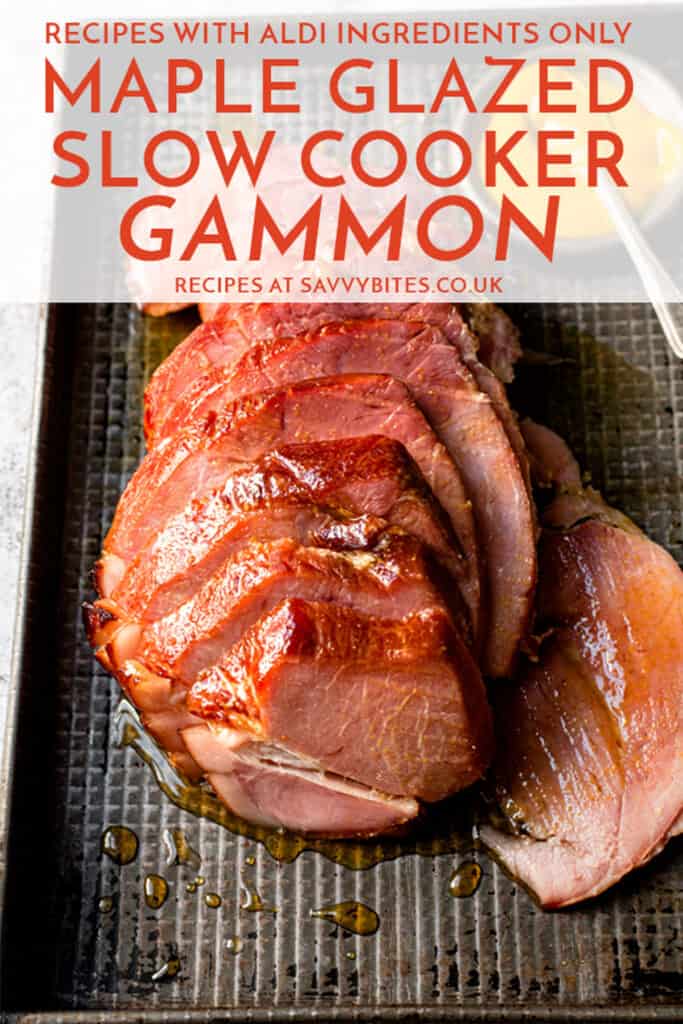 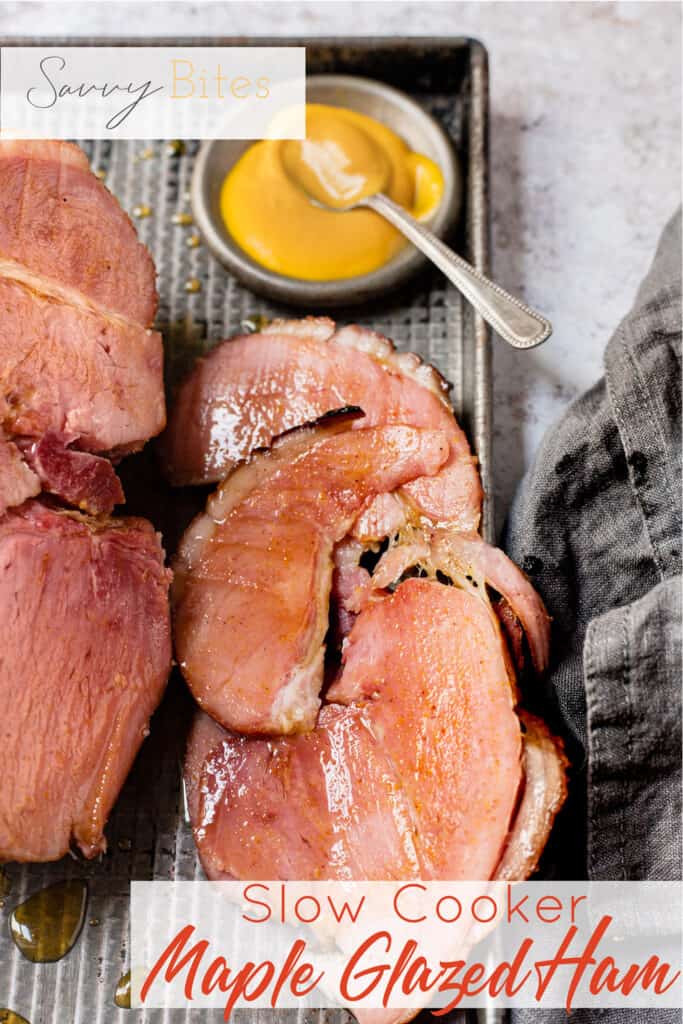 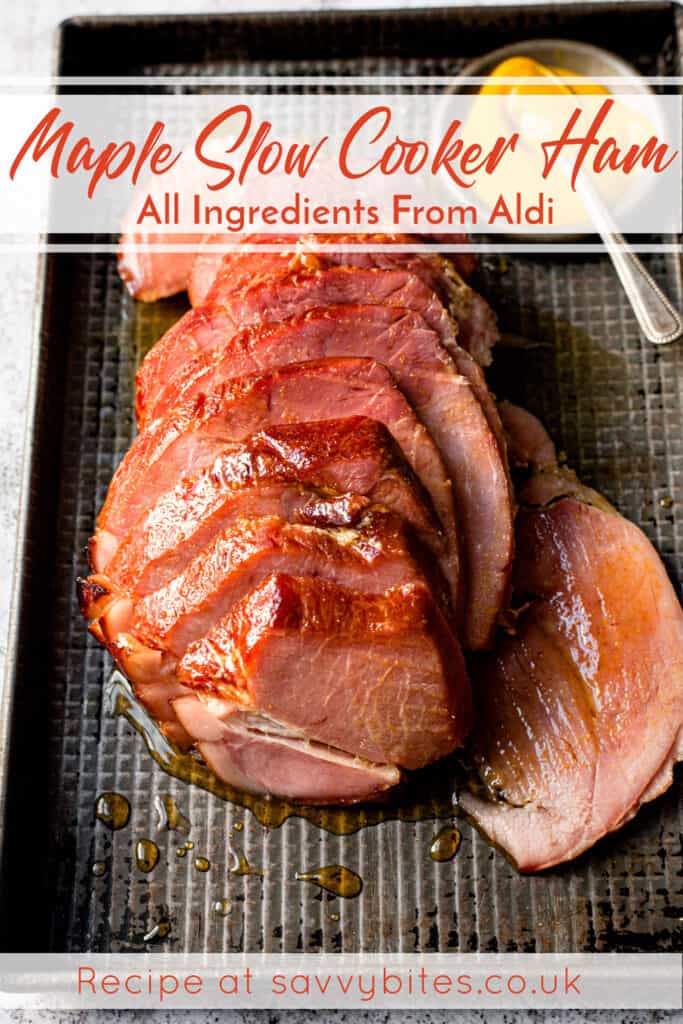 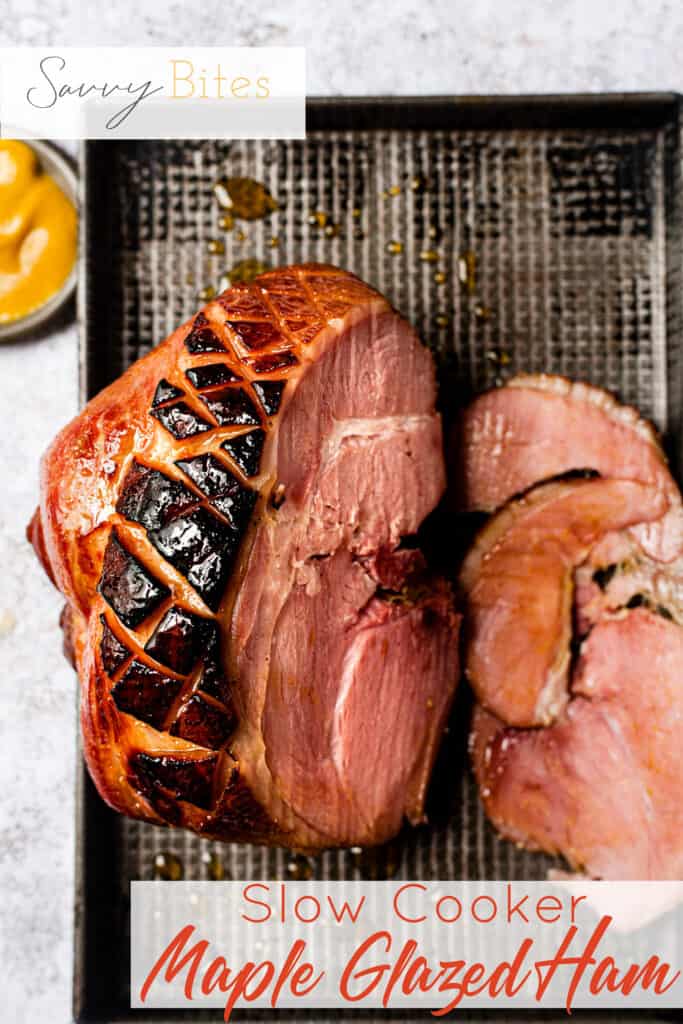 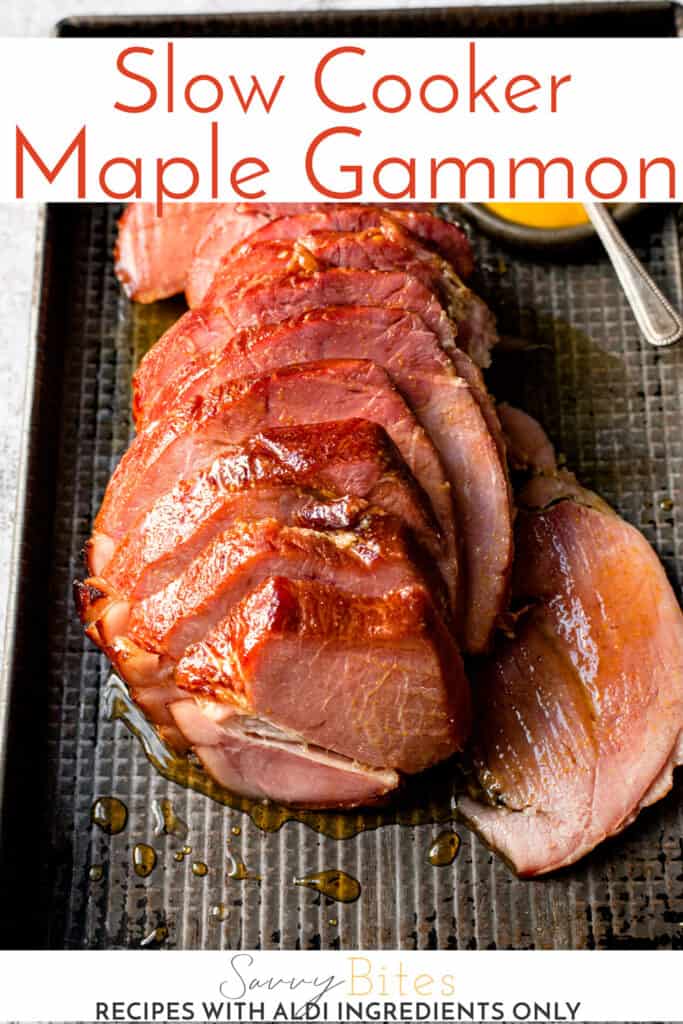 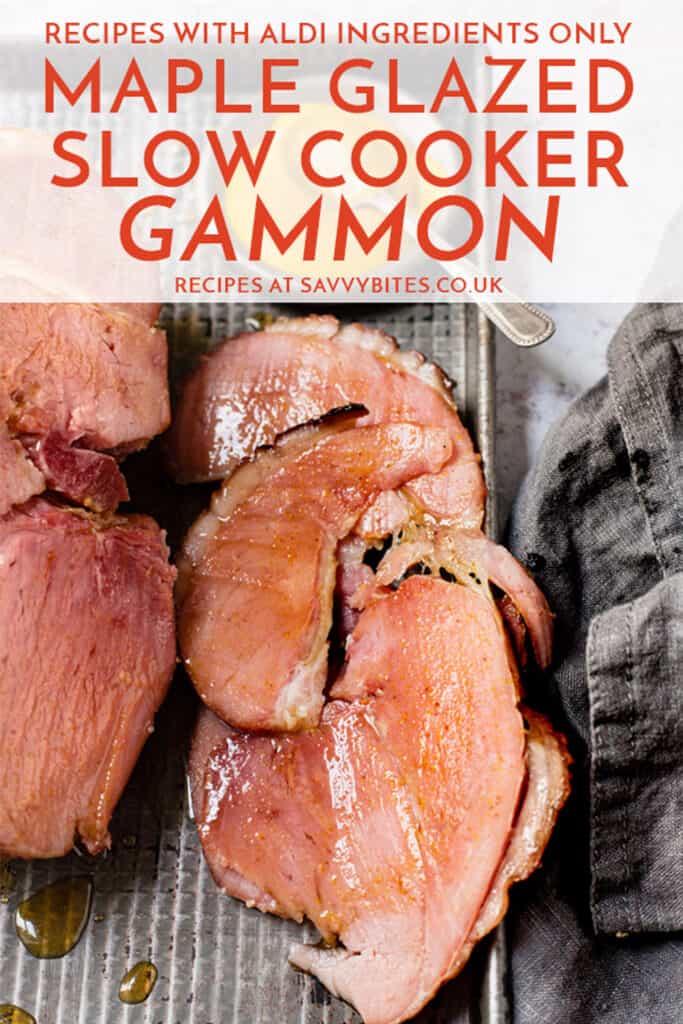 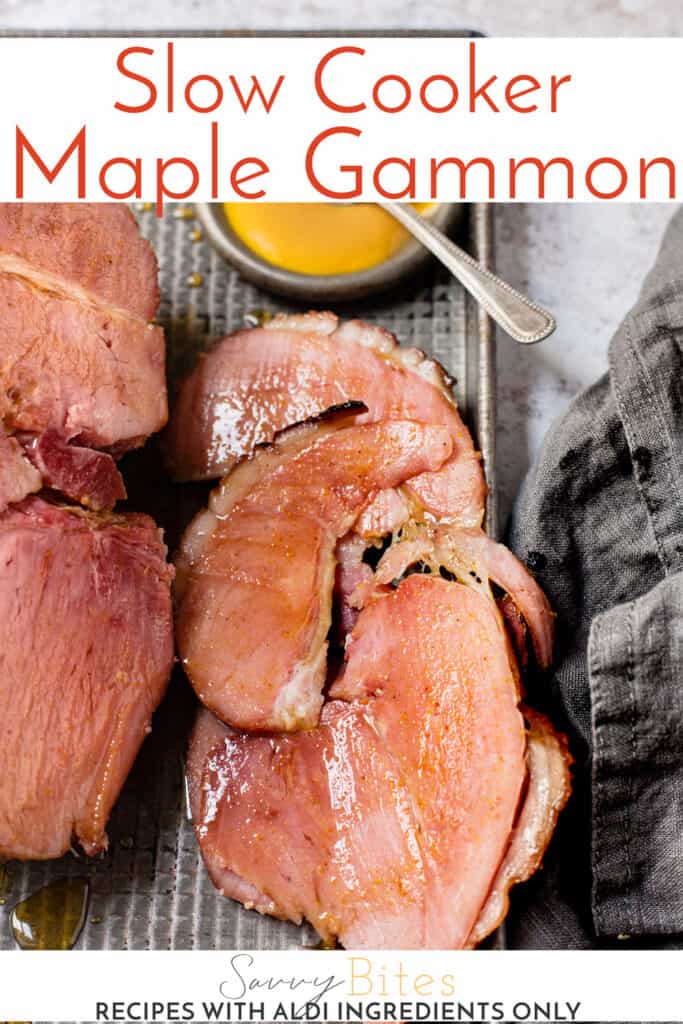 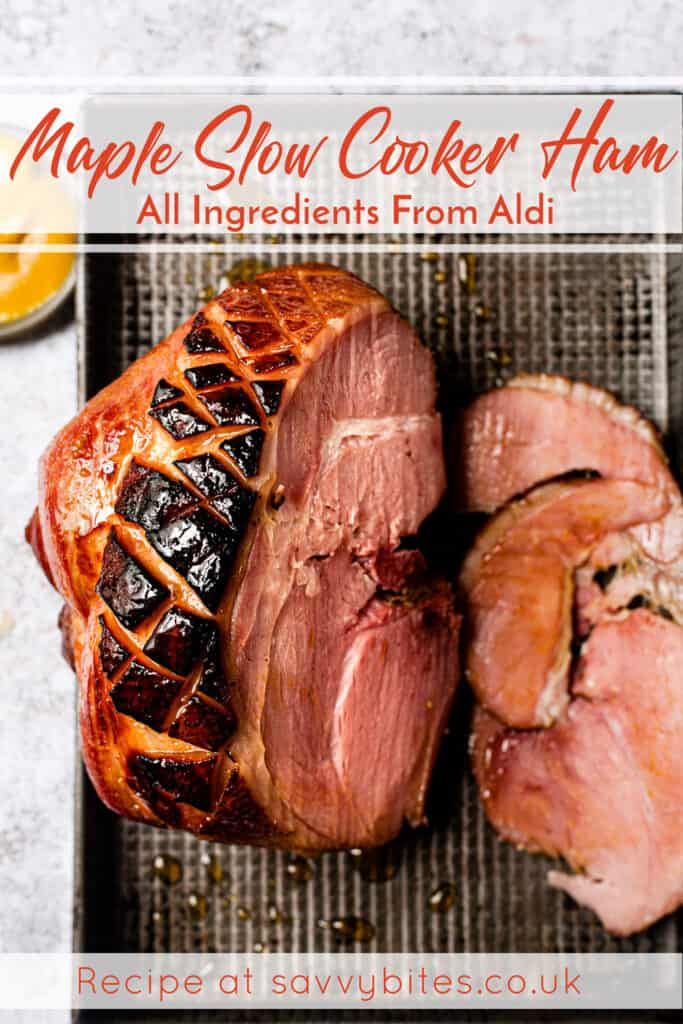 This slow cooker gammon joint is slow-cooked with apple cider and apples, then glazed with a maple mustard sauce and the crackling is crisped up under the grill. This is the perfect ham to make for a lazy Sunday. 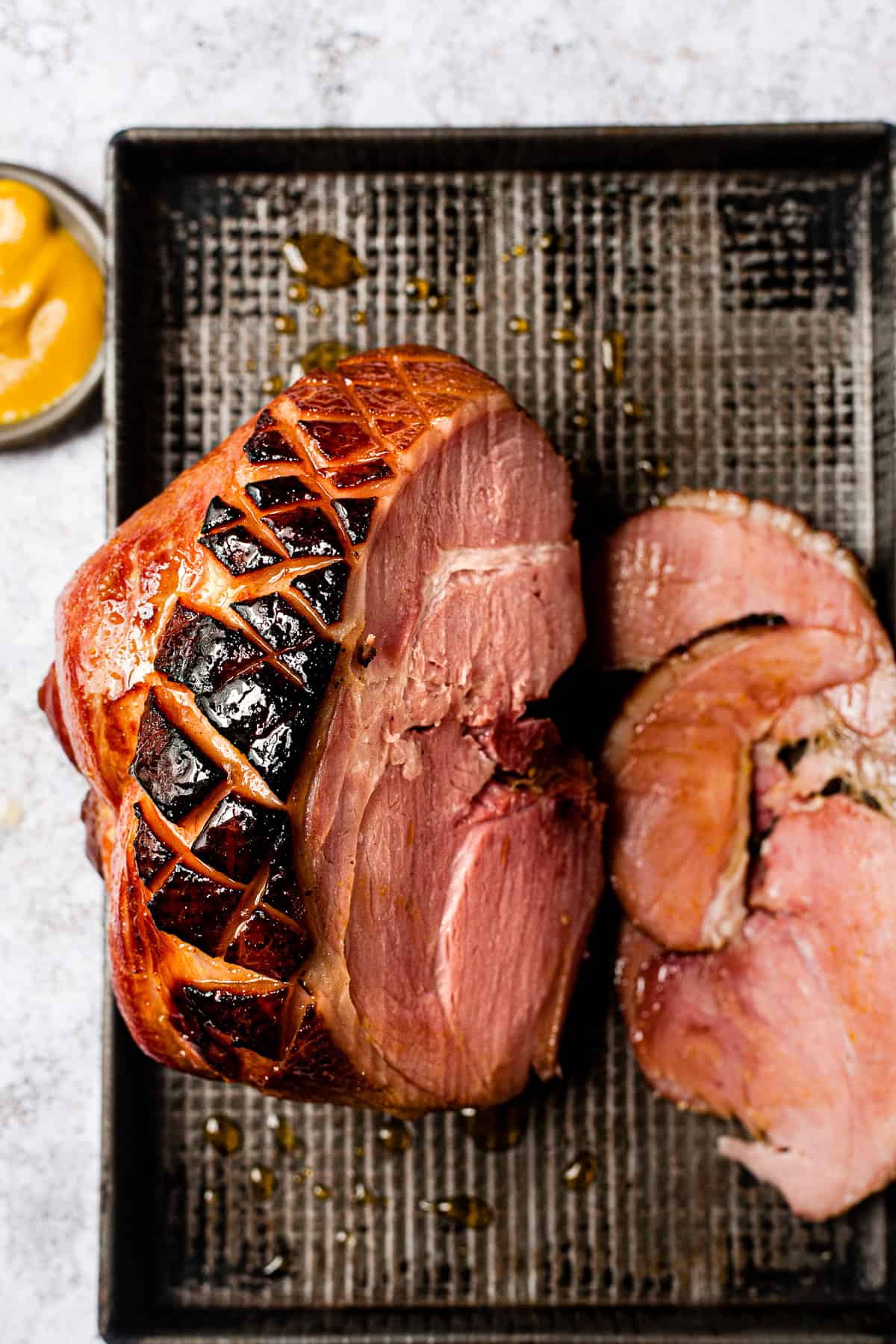 Honestly, this whole slow cooker week has been amazing, but I may just want to take a minute to really talk about this gammon joint. Just a few super basic ingredients and a few hours and you have a show stopper of a Sunday roast or a Christmas lunch. If you feel like skipping turkey this year, may I recommend that you try this instead.

I also just want to highlight just how economical this slow cooker ham is. This joint is 1.7kg and only cost £7.71. This joint will easily feed 6 people! An amazing alternative to turkey this year, if you are on a tight budget. 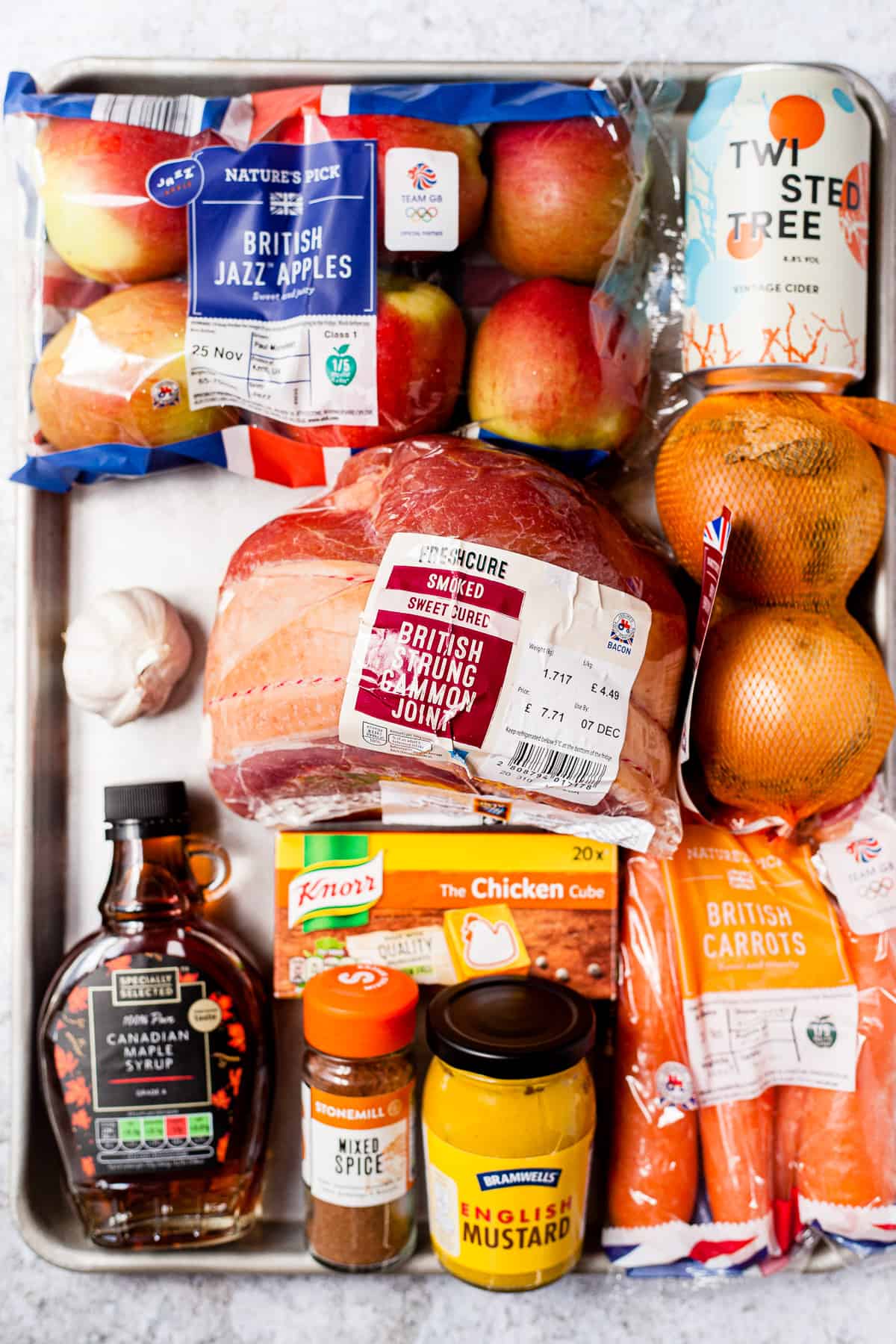 Gammon joint (deboned)- Smoked and sweet cured, but you can make this same recipe with an unsmoked joint if you prefer.

Cider and chicken stock cube- Forms the cooking liquid for the gammon.

Apples, carrots, garlic and onion- Add so much flavour to the gammon as it slow cooks.

Maple syrup, English mustard and mixed spice- Forms the glaze for the ham 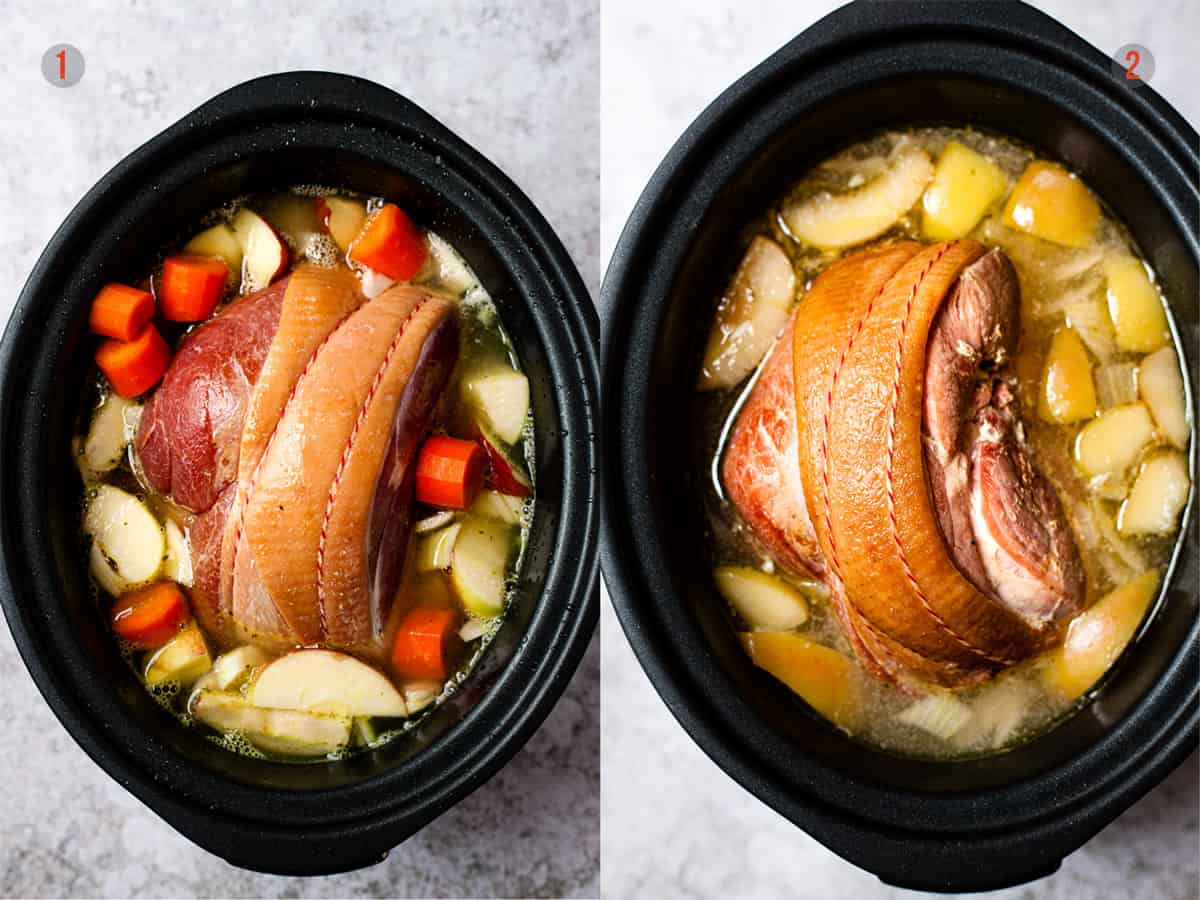 Step 1 & 2- This really is the simplest but most show-stopping dinner. Unwrap the gammon joint from the plastic but leave it tied with the string. This helps it keep it's shape while it cooks. Place it in the slow cooker with the chopped apples, carrots, onion and garlic. Pour the cider and vegetable stock over the gammon and cook on high for about 3 hours or on low for 5 hours. 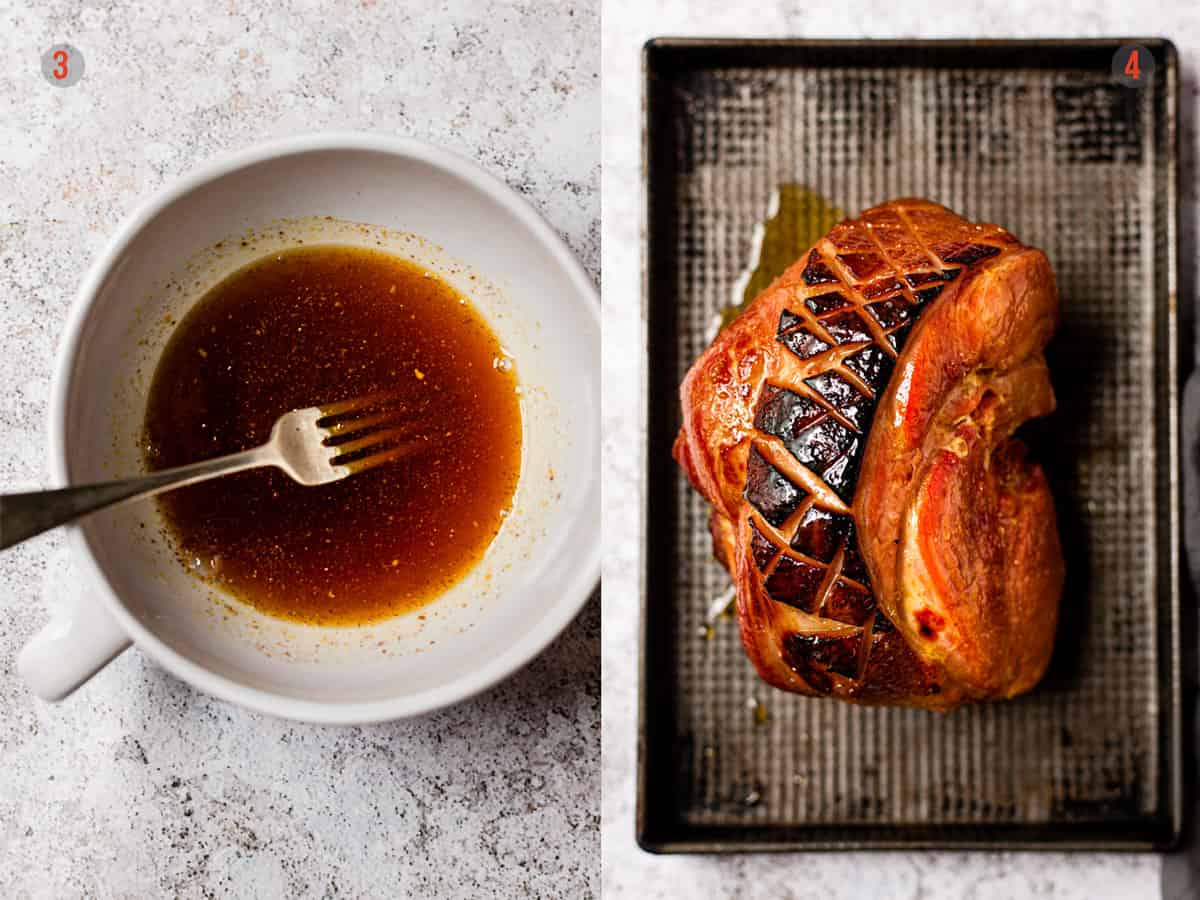 Step 3 & 4- Mix the ingredients for the maple glaze and set aside. Turn on the grill (broiler) to heat up. When the gammon is cooked remove it from the slow cooker and place it on a tray. Cut the strings off and using a very sharp paring score the skin of the gammon in a diamond pattern without going all the way through. Drizzle the gammon with the maple glaze (you can use honey here too) and place under the grill for about 10 minutes, or until the skin is crispy and dark golden.

Slice and serve. That's it. That's how easy this maple gammon is. But I've got some tips and tricks below that you need to know about. 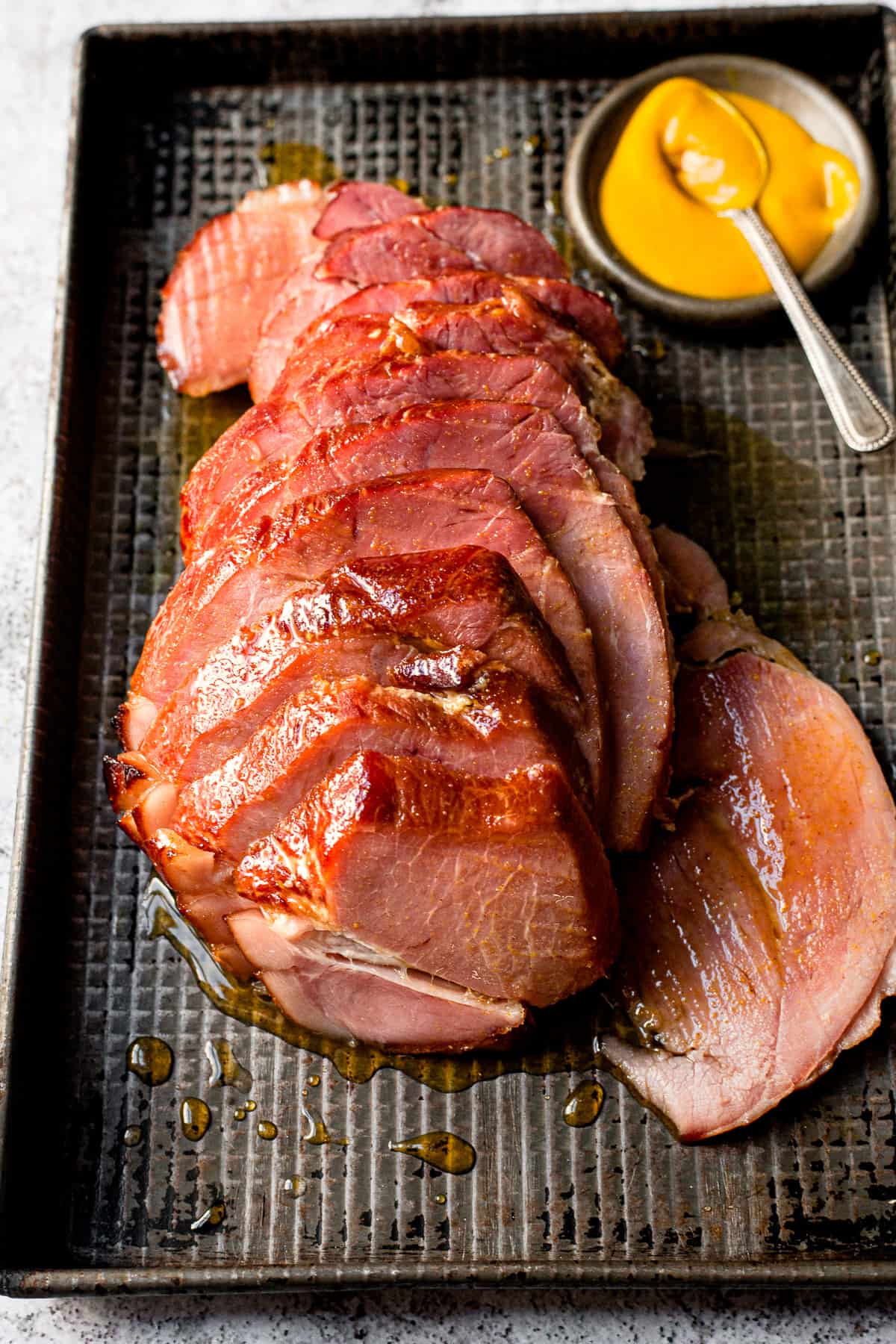 How to tell when it's cooked

The best way to tell if a gammon joint is cooked is by using a thermometer. The internal temperature of the gammon should be 70c when it's cooked.

If you don't have a thermometer, you can insert a paring knife into the gammon. If you have difficulty pulling out the knife or if the meat feels spongey, it needs longer. The gammon will be firm once it's cooked through.

You'll probably have leftovers if you're lucky. Store in the fridge for up to 3 days or you can freeze for up to 3 months. Perfect for sandwiches, or having with fried eggs. Or, like me, maybe you just steal slices and eat them cold every time you pass by the fridge!

I've probably said this every day this week, but this might be my favourite slow cooker recipe yet!

Slow cooker gammon is the perfect Sunday roast. Maple glazed, and cooked with cider this gammon is perfect for feeding a crowd. ♡

THANKS SO MUCH FOR READING AND COOKING ALONG WITH ME! IF YOU MAKE THIS RECIPE OR HAVE A QUESTION, I’D LOVE IT IF YOU LEFT A COMMENT AND A RATING. YOU CAN ALSO FOLLOW ALONG ON PINTEREST, FACEBOOK AND  INSTAGRAM TO SEE WHAT WE’RE EATING, PINNING AND A LITTLE BEHIND THE SCENES TOO!

Get your weekly recipe fix.

Hi, I'm Deborah! Savvy Bites was created to answer the question "what's for dinner?" It's a place where fresh, (mostly) healthy, everyday recipes are made with inexpensive and common ingredients from Aldi UK.